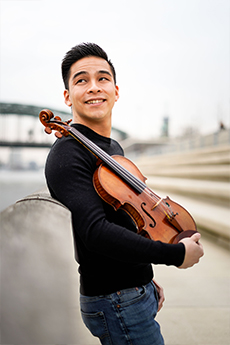 Violinist Miclen LaiPang is quickly establishing himself as one of the most exciting and versatile artists of his generation and has earned global recognition as a soloist, chamber musician, concertmaster, and teacher. A rave review by the New York Times said that Miclen is “a force to be reckoned with…” while German newspaper Die Welt said he is “a musician of daring virtuosity with gripping access and noble elegance”. Miclen has performed with numerous orchestras and has had solo recitals in halls such as Carnegie Hall, Vienna Musikverein, Salzburg Dom, Walt Disney Concert Hall, Elbphlharmonie in Hamburg, Wigmore Hall, Royal Albert Hall, Berlin Philharmonie, Victoria Hall in Singapore, St. Martin in the Fields, and many more.
Miclen started his first violin lesson at the age of three and by the age of 9, he had won the grand-prize of the Merit Award Competition, ASTA, MTNA, and Redlands Bowl Young Artist Competition. Since then, Miclen has performed in over 60 countries and has won multiple awards, including the Stradivarius International Violin Competition, Schoenfeld International String Competition, Grand Prize of the American Fine Arts National Competition, Grand Prize at the Vancouver International Music Competition, and 1st and Special Prize at the International Moscow Music Competition.
Miclen has recorded numerous CD’s on both Sony RCA Red Seal and Naxos with the most recent one released in November 2020 featuring a transcribed Beethoven Kreutzer Sonata for Violin and Strings with the LGT Young Soloists. He has appeared in festivals including Prussia Cove Open Chamber Music, Rheingau, Rome Chamber Music Festival, the New York String Orchestra Seminar, Verbier, and the Castleman Quartet Program. In 2021, Miclen won a three year scholarship to join the Chamber Music Academy at Villa Musica Rheinland-Pfalz where he collaborates with leading musicians from around the world.
He has had the privilege to work with international artists such as Ivry Gitlis, Janos Starker, Gerhard Schulz, Lawrence Dutton, Robert McDuffie, Irvine Arditti, Csaba Erdélyi, Jens Peter Maintz, and Peter Serkin. His primary mentors include Ida Bieler, Charles Castleman, Ruggiero Ricci, Aaron Rosand, Alice Schoenfeld, and Linda Rose.
Miclen was the teaching assistant of renowned violinist Ida Bieler under whom he completed his Konzertexamen degree with highest honors from the Robert Schumann Hochschule in Düsseldorf, Germany. He is currently studying with Boris Kuschnir at the Universität für Musik und darstellende Kunst Graz. He has worked as guest concertmaster for ORF-Radio Orchestra Vienna, is a member of the highly-acclaimed O/Modernt Chamber Orchestra, and is currently the founder and artistic director of the Miesbach Kammermusikfestival.
Miclen performs on various violins and bows including the “ex-Grumiaux” by J.B. Vuillaume c.1850 and a bow made by D. Peccatte. He is grateful for the generous support from Florian Leonhard Fine Violins, American Fine Arts Association, DAAD, Talent Unlimited, and Villa Musica.