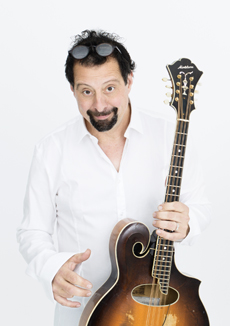 For over forty years Mike Marshall, one of the world’s most accomplished and versatile mandolinists, has been at the forefront of genre-bending acoustic music. A living compendium of musical styles, he seamlessly blends his American roots background with a deep understanding of European classical, American pop, jazz, and Brazilian music. He is also a master on guitar, mandocello, bass, and violin. In 2014 he was nominated for a Grammy Award for his recording with the Turtle Island Quartet. His most recent CD features J. S. Bach duets performed on mandocello and mandolin with his wife, mandolin virtuoso Caterina Lichtenberg. He records on the Windham Hill, Sony Classical, Rounder, Sugar Hill, and Compass labels, and on his own Adventure Music label.

As director of the Mike Marshall School of Mandolin through the ArtistWorks online educational company, Mr. Marshall teaches hundreds of mandolinists worldwide. He has published six books on mandolin technique and produced three instructional DVDs with Homespun. Creator of the Acoustic Music Seminar at the Savannah Music Festival, he is also codirector of the Mandolin Symposium at the University of California in Santa Cruz. In 2017 will launch the Global Mandolin Retreats in the San Francisco Bay Area.