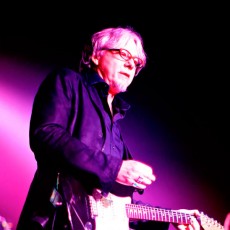 Mike Mills is one of the founding members of R.E.M., the internationally-acclaimed rock band from Athens, GA. His trademark vocal harmonies and intricate bass lines led fans and critics alike to dub him the band’s “secret weapon.”

Born in Orange County, California, Mills moved to Macon, Georgia, where he and drummer Bill Berry attended the same high school. The pair left Macon to attend the University of Georgia in Athens where they teamed up with guitarist Peter Buck and singer Michael Stipe, and began writing songs for the band which would become R.E.M. The group’s first show was at a friend’s birthday party in an abandoned church on April 5, 1980.

Mills, the son of a tenor who sang on The Ed Sullivan Show and in the Naval Aviation Choir, developed a keen ear for harmonies and a talent for playing instruments at an early age. He has always been known for his musicianship, songwriting, vocals, and production sensibilities in his work with R.E.M., as well as his side projects and solo works. He also contributed piano, keyboards and assorted other instruments. After thirty-one years and more than eighty million records sold, R.E.M. disbanded in 2011, but the band members remain good friends and actively pursue further musical adventures and other artistic and humanistic pursuits.

R.E.M., one of the seminal groups of its generation, won numerous awards and toured most corners of the world throughout their storied career. Despite several hit singles such as Everybody Hurts, Losing My Religion, Man on the Moon, Leaving New York, and The One I Love, R.E.M. always maintained their creative edge, and along with it, critical acclaim and their loyal and supportive fan base.