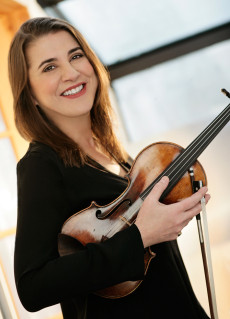 Passion, excitement, and innovation are the hallmarks of internationally-acclaimed soloist and chamber musician Nadja Salerno-Sonnenberg’s artistry. Highly regarded for her compelling performances, daring interpretations and dedication to her craft, she is one of today’s leading violinists, renowned for her work on the concert stage, in the recording studio, and in her role as music director of the San Francisco-based New Century Chamber Orchestra, which she joined in January 2008. A powerful and creative presence on the recording scene, with over 20 releases for EMI and Nonesuch, Nadja’s latest CD (NSS MUSIC, May 2014) features her as soloist in works by Assad, Bolcom, Daugherty and Zwilich.

Ms. Salerno-Sonnenberg’s professional career began in 1981 when she won the Walter W. Naumburg International Violin Competition. She is the recipient of an Avery Fisher Career Grant and the Avery Fisher Prize. An American citizen, Ms. Salerno-Sonnenberg was born in Rome and emigrated to the United States at the age of eight to study at The Curtis Institute of Music. She later studied with Dorothy DeLay at The Juilliard School.