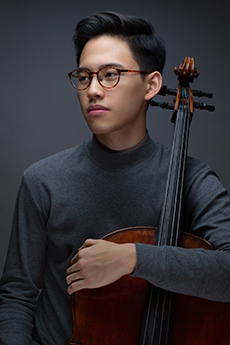 In 2018, Nigel became the first Malaysian prizewinner at the International Karl Davidov Competition in Latvia. Born in 1998 in Malaysia, Nigel began playing the cello at the age of seven and is currently studying his Masters with Leonid Gorokhov at the Hochschule für Musik in Hanover. A keen chamber musician, Nigel plays in various ensembles and has given recitals across Europe and Asia. He has featured in a number of chamber music festivals such as the Hitzacker Sommerliche Musiktage, Mid-Somerset Festival, and Verbier Festival. His discography includes recordings such as Georg Katzer‘s ‚Lieder und Songs‘ for DeutschlandFunk and Saint Saens’s ,Mon cœur s’ouvre à ta voix’ for NDR. Nigel plays on a cello by Jacques Pierre Thibout from 1838, generously on loan from the Fritz-Behrens-Foundation.