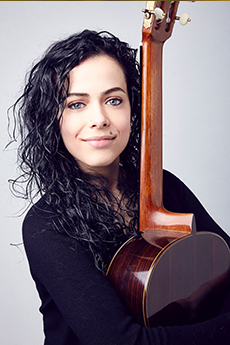 Renata Arlotti began studying classical guitar in her home town of Sassari, continuing in Milan under the guidance of virtuoso Lorenzo Micheli.

She obtained her Bachelor’s Degree with highest honors from the Conservatoire de la Vallee d”Aoste and a Master in Music Performance from the Conservatorio della Svizzera Italiana in Lugano with Lorenzo Micheli.  A few months later Renata was admitted to the Royal Academy of Music in London, graduating under the guidance of Michael Lewin, David Russell, and Fabio Zanon.
At the same, she attended the Accademia Musicale Chigiana in Siena with Oscar Ghiglia, being awarded the Diploma of Merit for the academy’s best students.

Her solo career has taken her to play in Italy, United Kingdom, Switzerland, Germany, Spain, France, USA, Japan, and Iran.

Renata recently released her debut CD on the Stradivarius record label for a project entitled Suites and Homages, dedicated to composers Vicente Asencio and Mario Castelnuovo-Tedesco. This CD has been praised by critics and has received enthusiastic reviews and awards.

Renata plays on two guitars made by the Florentine luthier Andrea Tacchi.