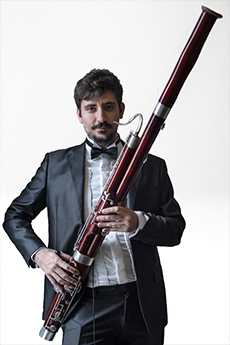 Riccardo Rinaldi graduated with full marks from the “G. Paisiello” conservatory of Taranto, and went on to perfect his studies at the National Academy of Santa Cecilia in Rome. He is currently studying at the Fiesole Music School.  He played lead bassoon for the Orchestra Giovanile Italiana in 2013 and 2014, and won a scholarship for lead bassoon at the Compagnia di San Paolo in 2014. In 2015 he auditioned for the Orchestra Ico della Magna Grecia where he was assigned the permanent position of second bassoon. From 2016-2018 he was lead bassoon of the Teatro Olimpico of Vicenza. His solo repertoire include J. Haydn’s  Sinfonia Concertante for violin, viola, bassoon and oboe and Vivaldi’s Concert for Basson, Oboe and Orchestra, rv 545 as well as Concerto for Basson and Orchestra, rv 474. As a chamber music artist he has performed at the Festival dei 2 Mondi di Spoleto, with the Ensemble Bernasconi of the Accademia Teatro alla Scala  and at the Rome Music Chamber Festival ( already in 2017).  He has recorded for Bongiovanni, Brilliant Classics, RadioRai3, Deutschland RadioKultur, and  Universitat Mozarteum Salzburg. He has been touring Asia and Europe and playing many famous venues such as the NHK Tokio, Konzerthaus Berlin, Scala of Milan, the Auditorium Parco della Musica of Rome. A graduate in philosophy, Rinaldi also held the position of professor of bassoon at the Dante Musical High School of Florence from 2014 to 2017.