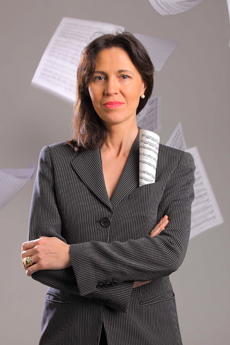 The Italian true contralto, Sara Mingardo, studied in her hometown Venice at the Academy Benedetto Marcello. She won prizes in some singing competitions, among which the Prize Giulietta Simionato at the 23rd Vienna Competition and the first prize at the Competition Toti dal Monte.
Sara Mingardo made her debut in 1987 and appeared since 1989 in internationally renowned venues including La Scala in Milan, Teatro Fenice, San Carlo, Teatro Regio, at the Festival of Salzburg, in London, France and in Switzerland. Her repertoire is extremely various and expands from L’Incoronazione di Poppea by Monteverdi to the Rape of Lucreze by Britten, while passing through Straniera or Anna Bolena or Tryptique by Puccini. She is notable for the title role in Rinaldo by G.F. Handel which she performed at the International Festival of Baroque Music of Bonn and at Théâtre des Champs Elysées. She is also aclectic in her choices of concerts activity, such as the Requiem of Johann Joseph Fux with Lauda per Nativita by Ottorino Respighi while passing through Messiah by G.F. Handel, the Requiem of Wolfgang Amadeus Mozart, La Petite Messe Solennelle and Stabat Mater by Rossini.
Sara Mingardo made her first recording in 1995 with Christophe Roussel. Additional recordings include Cantate, Gloria and Magnificat by Antonio Vivaldi with Rinaldo Alessandrini.