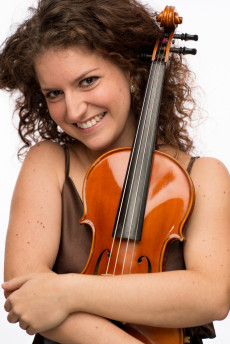 Born in Sarzana in 1990 Sara studied violin at the “O. Vecchi-A.Tonelli” Conservatory of Music in Modena, where she graduated in 2010. She won several international youth competitions and since 2010 is a member of  EUYO, with which she has toured in major music halls, such as Carnegie, Boston Symphony, Kennedy Center, Konzerthaus in Berlin and Concertgebouw in Amsterdam among others.

Sara plays first violin in the Charis Quartet and in many other chamber music ensembles. She is a member of the prestigious “Verbier Festival Orchestra” since 2012 and since 2013 she studies at the Zürcher Hochschule der Künste with N. Chastain. In 2014 Sara has become violin of the RAI National Symphonic Orchestra.