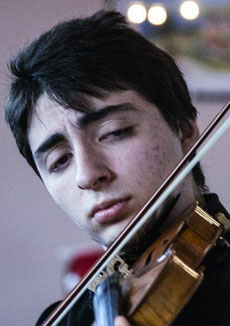 Zagame was born in Rome on the 30th November 2000 to a family of musicians. He began his violin studies at three years of age, and at five was already the youngest violinist of the Juniorchestra of the Accademia of Santa Cecilia, and of the Orchestra Sinfonica Giovanile at the  Perosi Conservatory. Given his unique musical gift he was admitted to study in a conservatory at the exceptional age of seven. He has studied with Endrit Haxhiaj, Luca Marziali, Renato Marchese, Pasquale Pellegrino, and Shalom Budeer.

At sixteen years of age having studied in the the class of M° Gualtiero Tambè, he graduated in violin from the Conservatorium of Santa Cecilia in Rome taking full marks with honours. He has taken part in numerous masterclasses (with  Maestros such as Parazzoli, Pieranunzi, Fabiani and Tchakerian amongst others). In 2014 he won the Overall First Prize at the Chroma Competition, and was selected to play first violin for the Rome Opera Orchestra during their production of the opera  Brundibar.

He is the first violinist in the “Archi Accademia Nova” Orchestra and has performed as a solo violinist in important venues  such as the Auditorium Parco della Musica, the Fondazione Walton of Ischia, the Rome Opera, Palazzo Braschi, the Teatro Olimpico of Vicenza and  in international festivals where he has been universally acclaimed by critics and public alike. He won the First Prize at the Concorso Crescendo of Florence in 2018 and came second in the Concorso Riviera degli Etruschi 2018.

He is currently frequenting the two year violin specialization course at the Conservatorium of Santa Cecilia. In 2019 he has taken part in the international “Al Bustan” Festival of Music & the Performing Arts in Lebanon conducted by M° Damiano Giuranna, and as a soloist in the “Gran duo concertante di L. Bottesini” during the prestigious “Un organo per Roma” Festival. He plays  the Gianni Ottaviniani violin  “Delfo”.