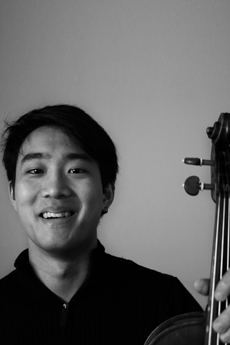 Seido Karasaki, a Naxos recording artist, is currently an Artist Diploma viola student at the McDuffie Center for Strings under the tutelage of Rebecca Albers and Victoria Chiang. His latest chamber music recordings of Beethoven’s Op. 16 Piano Quartet and other works will appear on the Naxos 250th Beethoven anniversary CD series. Karasaki’s solo awards include top prizes at the Ohio Viola Society and the Indianapolis Musicale Matinee competitions, and he was a competitor in the 2019 Lionel Tertis competition. As an orchestral musician, Karasaki has led orchestras as principal violist under the batons of conductors including Franz Welser-Möst, Robert Spano, Osmo Vänskä, Patrick Summers, Carl St. Clair, and Christian Arming. He is also on the sub-list for the Cincinnati, Atlanta, Rochester, and Indianapolis symphonies. Recent collaborations have led him to solo and chamber music performances with Itamar Zorman, Orion Weiss, and Lawrence Dutton. Karasaki completed a MM with Atar Arad as his Assistant Instructor in 2018, and he earned a BM from Oberlin Conservatory in 2016. His other mentors include Kirsten Docter, Edward Gazouleas, and Steve Wyrczynski.
He enjoys cooking in his spare time.