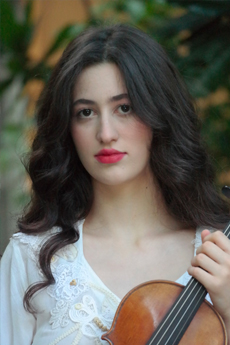 Born in Erba in 2000, Sofia graduated with honor and special mention at the Istituto Superiore di Studi Musiali Claudio Monteverdi in Cremona, where she is currently attending the second year of the master degree at Monteverdi Conservatory in Cremona. She is also studying at the “Stauffer Center for Strings” Academy in Cremona and at the Accademia Chigiana di Siena, with Salvatore Accardo.
She held numerous recitals both as a soloist and chamber musician in Italy and abroad, particularly devoting herself to the violin and piano repertoire, with Giorgio Lazzari. As a soloist she performed with the “Hemu Orchestra” of Lausanne, with the “Eurasia Chamber Orchestra and with the “Nuova Orchestra Busoni”, collaborating with conductors such as Salvatore Accardo, David Geringas and Massimo Belli. She has played the Brandenburg Concerto n. 3 by J. S. Bach with Steven Issrerlis.

She regularly plays as a member of the OCI orchestra (Orchestra da Camera Italiana) founded by Salvatore Accardo.  She usually plays at the G. Arvedi Auditorium on historical instruments from the Museo del Violino in Cremona, like the Stradivari Vesuvius, the Cremonese (ex Joachim) and the Clesbee. She has two recordings to his credit: the Concerto n. 5 K 219 by W. A. Mozart (under the direction of M. Belli) for the label “Suonare News”, and the Quatour pour la fin du temps by O. Messiaen with the Eurythmy Quartet. She has received prizes in numerous national and international competitions such as the Grand Prize Virtuoso in Vienna, for which she performed at the Glaserner Saal Musikverein, she won the special prize for the best interpretation of A. Vivaldi’s Four Seasons at the Tibor Junior International Competition in Sion, the first prizes at the City of Moncalieri Competition and the City of Giussano International Competition.
She is the winner of the first edition of the Lombardia è Musica competition, performing at the prestigious Sala Verdi in Milan.