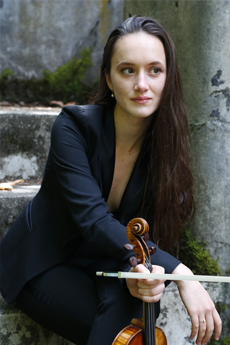 American violinist Sophia Stoyanovich has captivated audiences since her premiere at age ten with the Bremerton Symphony. She has soloed with numerous orchestras including highlights with the Seattle Symphony at Benaroya Hall, and has performed across North America, Europe, Russia, China, and Vietnam.

Recent highlights include joining the roster for Chamber Music America as recipient of the 2021 Ensemble Forward Grant, winner of the 2021 Beverly Hills National Auditions, and recital debuts on The Dame Myra Hess, Great Music L.A., and Encinita Music by the Sea concert series. Upcoming engagements for 2022 include debut appearances with The Rome Chamber Music Festival, La Jolla Music Society, Crocker Art Museum Concert Series, as well as the release of her album, American Elegy, with Orpheus Classical featuring the Serbian-American compositions of her father, Patrick Stoyanovich.

Ms. Stoyanovich currently performs with the New York Chamber Orchestra, Symphony in C, and is a chamber mentor for The Midori & Friends Foundation. She also co-hosts the podcast American Stories with pianist Derek Wang. Ms. Stoyanovich holds Bachelor and Master of Music degrees from The Juilliard School.