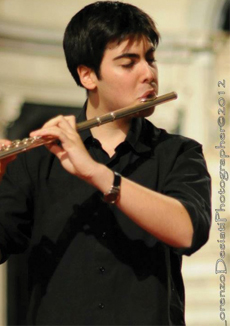 Tommaso Pratola earned his degree in 2013 at the A. Casella Conservatory. in 2010 he won scholarships from the Società umanitaria of Milan and the MiuR Premio delle Arti. He entered the Orchestra Giovanile italiana (Fiesole) as a regular member in 2013 and became a full member of the European union youth Orchestra (EuyO). in 2015 he won the Tomasi headjoint prize at the 15th Gheorghe Dima international Flute Competition and played principal flute for the Teatro Petruzzelli. He earned his master’s degree at Haute École de Musique de Genève in 2016 and is continuing his studies at the Hanns Eisler Hochschule für Musik, Berlin.