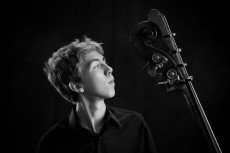 Pursuing an undergraduate degree in bass performance at the Robert McDuffie Center for Strings, Trevor Young is very ambitious. He has played in festivals in Bavaria, British Columbia, Baltimore, and the University of North Texas. His primary teachers are Kurt Muroki and Rachel Calin.  He has studied with Orin O’Brien of the New York Philharmonic, David Neubert of the Austin Symphony, and Jessica-Gilliam Valls of the Austin Lyric Opera. Also a prolific composer, he has received commissions from Jeff Bradetich and Tomastik strings. Mr. Young is always writing and exploring the vast expanse of the musical world.