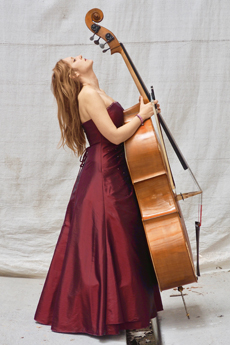 Valentina, born in Italy to German mother and Italian father started transcribing the music of Frank Zappa at age 11. Switched from piano to bass in late 2009, she explores double bass playing virtuosity.  Many composers have written repertoire for her.  Her first solo album, Music from the Sphinx debuted in 2019 for Da Vinci Classics.  She has degrees from Istituto Musicale L. Boccherini in Lucca, the Royal College of Music and Trinity College of Music in London where she is teacher assistant in Leon Bosch’s class at Trinity Laban Conservatoire of Music and Dance, she is also part of  a young artist project called Talent Unlimited.

Awards include RCM Double Bass Competition 2016, the Vernon Elliot Double bass Competition 2018, the Vivian Joseph Classical Concerto Competition 2018, the De Simone and Partners prize in Chamber Music Festival  Rome. Valentina also won a place with scholarship in the Accademia Chigiana for summer 2018 with Maestro Giuseppe Ettorre. She was selected with 16 young double bass players from around the world to perform in live final rounds at worldwide double bass solo competition granted by “Bradetich Foundation” in Denton, Texas 2017; soloed with I solisti veneti and Claudio Scimone. Plays a 2014 Scipioni Bass made Mantua.