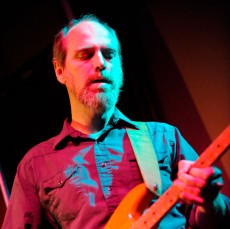 William Tonks is an Athens, Ga, based musician with a long history of recording and touring. Born in New Jersey, he was raised in downtown Savannah, Ga. He began playing guitar around that time, inspired by the Beatles, Rolling Stones and CSNY, taking classical guitar lessons and squeezing in a rock song at the end of every lesson.

Following graduation with a degree in literature, Tonks migrated to Athens, Ga, where there was already a thriving music scene in place, with R.E.M. and Pylon calling Athens their home. Graduate school didn’t really work out, but playing in bands did. As did a long career at The Taco Stand, a day job that allowed lots of time for touring, writing and recording. Tonks played and released albums with such bands as Redneck Greece DeLux, Bloodkin, and Barbara Cue, a Widespread Panic side-project that also featured former Drive-By Trucker John Neff. Tonks also recorded and performed with Jack Logan on many occasions. The closest category in which he’d be included is Americana.

Tonks is the Director of Visitor’s Services at the State Botanical Garden of Georgia, a unit of the University of Georgia, by day and still plays and records often.