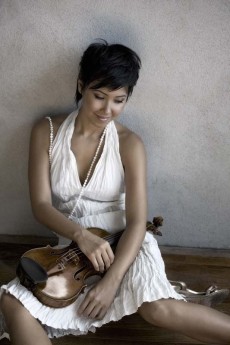 Yoon Kwon leads an extraordinarily versatile career. 2015-2016 marks her 10th season as member of the first violin section of the Metropolitan Opera Orchestra. Her new band, with drummer Stewart Copeland from The Police, will feature her in both acoustic and electric violin. She serves on violin faculty at Rutgers University Mason Gross School of the Arts.
Yoon began her professional career with the New Jersey Symphony Orchestra at 13, and at 17 made her New York Avery Fisher Hall debut. Since then, she has performed extensively with major orchestras on five continents. Her debut album was released under the RCA/Red Seal label. She is also featured on the jazz quartet album “Pheonix”.
Yoon’s chamber music appearances include Marlboro, Verbier, Tanglewood, Kuhmo, Rome, Aspen, La Jolla, Spoleto, Santa Fe Chamber Music Festival. From 2006-2009 Yoon was a member of The Chamber Music Society of Lincoln Center II. As recitalist, she has performed in over 100 cities, and toured extensively with her sister, pianist Min Kwon. She made her Carnegie Hall recital debut in 2008.
Yoon Kwon holds her BM, MM, and the prestigious Artist Diploma from The Juilliard School. A protégé of Dorothy DeLay, she also studied with Cho-Liang Lin and Donald Weilerstein.