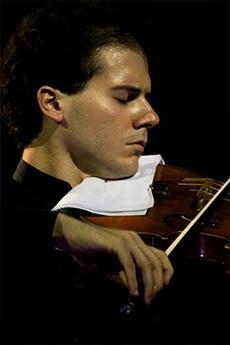 Born in Rome in 1994, once he graduated from the Santa Cecilia Conservatory under Margot Burton and Luca Sanzò, Laureti went on to take a first Master in Music at the Haute Ecole de Musique de Lausanne. Currently he is continuing to refine his studies under the guidance of Alexander Zemtsov at the Hochschule für Musik und Tanz in Cologne, at the Orchesterzentrum  of Dortmund, and also with the Accademia Walter Stauffer of Cremona. He has won prizes at the Anton Rubinstein International Competition, Virtuoso & Belcanto and Premio Clivis, and taken part in masterclasses held by world famous teachers.

As a chamber music artist he has performed with Karl-Heinz Steffens, Franco Petracchi, Thomas Duis and Alexander Hülshoff, and has collaborated with establishments such as the William Walton of Forio d’Ischia Foundation (IT), Villa Musica Rheinland-Pfalz (DE), Aurora Chamber Music (S), and the Swiss Chamber Academy (CH). Since 2018 he has been a member of the European Union Chamber Orchestra and the Mahler Chamber Orchestra Academy. Furthermore he has collaborated with the Orchestre de Chambre de Lausanne, Orchestra Roma Sinfonietta and the Imago Sonora Contemporary Ensemble, and with conductors such as Antonio Pappano, Andres Orozco-Estrada, Joshua Weilerstein and Riccardo Muti.