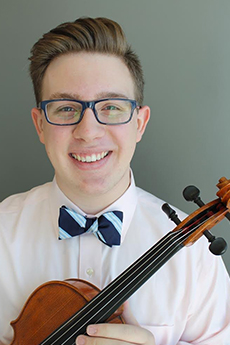 An Artist Diploma student at the McDuffie Center for Strings, James is a recent graduate of the University of Michigan School of Music, Theatre and Dance. He studied at the Aspen Music Festival for three summers as an orchestral fellow and played principal viola for the Aspen Opera Theater’s production of Sondheim’s A Little Night Music. He toured Spain as principal viola with the Pittsburgh Youth Symphony Orchestra, performed in Carnegie Hall in the National Youth Orchestra of the USA led by Christoph Eschenbach, and toured Europe with conductor Valery Gergiev. He has also played in several award-winning quartets in many U.S. cities. James plays a 2014 William Bagnato viola (Chicago, 2014).