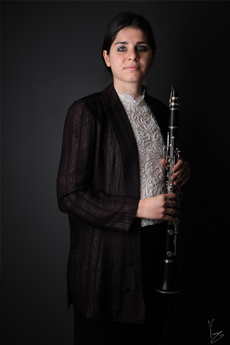 Letizia Elsa Maulà is an Italian clarinet player from Bergamo.

In 2014 Letizia entered the Masters program at the Conservatorium Van Amsterdam and also the Codarts Conservatory in Rotterdam, becoming a member of the Rotterdam Philharmonic Orchestra Academy.

Letizia plays both chamber and orchestra music and is frequently invited to perform in various orchestras in the Netherlands, Germany and Italy.

Letizia is part of different ensembles since the beginning of her career: in 2010 member of the woodwind quintet: “Quintetto Indaco” and in 2014 as part of the “Ensemble Sequenza”.

Her Dutch chamber music career started in 2015 as member of the in Rotterdam based woodwind quintet “Quintet Les Cinq”, which got to the final of “Grote Kamermuziekprijs”.

In 2016 Letizia was selected for a collaboration with “Gould Piano Trio”.

For the season 2016/2017 Letizia was member of the Rotterdam based ELLE Trio, focused on the project “women in music”, which got to the final in “Grote Kamermuziekprijs” in 2017. The season 2017/2018 was Letizia selected with a scholarship to play with the violinist Lukas Hagen and the pianist Andrea Lucchesini. Letizia is member of the “Rotterdam Chamber Music Society”.

In 2018 Letizia founded together with the cellist Sylvia Cempini the “Phoenix Ensemble”: a collective of musician from the duo to the trio with violin or cello.